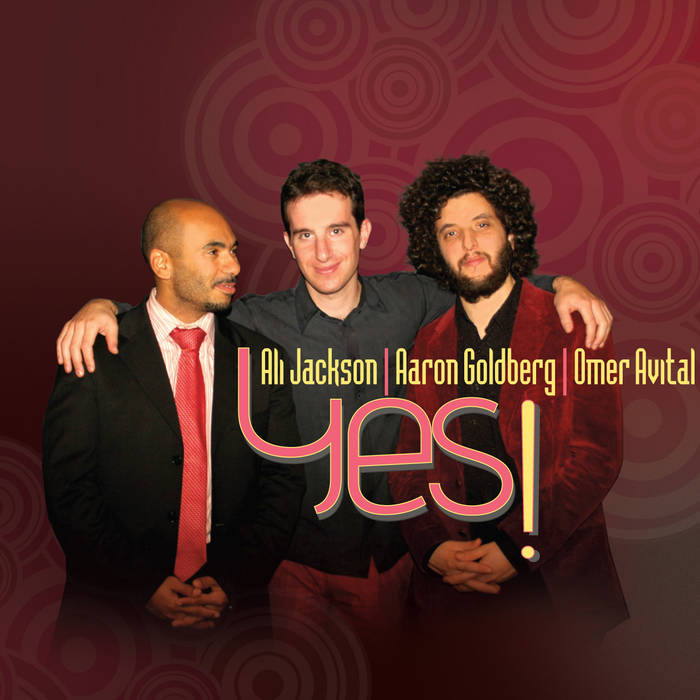 The bond between old friends gives life meaning. When the friends are improvising musicians sharing the stage, their common language cements a mutual trust that can ignite the bandstand. Music has been the glue binding the friendships of bassist Omer Avital, pianist Aaron Goldberg and drummer Ali Jackson for nearly twenty years. Though they have performed in many combinations and under the aegis of different leaders for many years, the trio’s new CD Yes! (Sunnyside, Jan. 17, 2011) is their first collaborative effort in the studio.

The members’ paths crossed in the early 1990s, a time period in which jazz was in a “traditional” resurgence with musicians donning the classic, handsome suited look. The trio of Avital, Goldberg and Jackson always chose to look beyond exteriors and toward the substance of the music. The group embodies the cultural mixture that jazz has made possible. The meeting of an Israeli of Yemeni/Moroccan decent, a Detroit-raised Black American with Islamic roots and a Jewish Bostonian stands as a tremendous example of the call of jazz music transcending race, religion and politics. Their faith in a common humanity imbues their art with love and optimism, two qualities at the emotional core of jazz music.

Goldberg and Jackson first met in 1991 during auditions for Manhattan School of Music. Goldberg and Avital met the subsequent year while attending the New School for Jazz and Contemporary Music, and Avital and Jackson met soon after in 1993 on the latter’s first ever European tour. The three men developed a real musical bond while being immersed in the now legendary Smalls Jazz Club community that fostered the jazz giants of this generation. The triumvirate finally came together in 1995 to play in Avital’s first quintet that included saxophonists Myron Walden and Greg Tardy. The connection between the three was spontaneous; musical personalities and esthetics meshed.

Though the members have differing backgrounds, personalities and perspectives, they speak a common language that draws from the entire history of jazz music and beyond. Their many years of shared experience, their respect for each other’s differences and infectious enthusiasm for each other’s ideas gives the ensemble a unique elasticity and variety of sound. Each member makes the most of his freedom to explore and comment, even on the microlevel of the single beat and phrase. When unified, this elicits a constant swinging conversation full of love and verve. This trio thus aims to set an example for all human communication, and in the process deliver a message of fortitude, gratitude and a hold-tight embrace of the moment. As Jackson puts it, “When we play together, there is only one rule: ‘Fun!’”

The members have all performed extensively both as leaders and members of illustrious ensembles. Along with leading his own trio Goldberg has been a regular member of groups led by such artists as Joshua Redman, Kurt Rosenwinkel, and Al Foster and a co-leader of projects with Guillermo Klein and among others. Jackson has been a longstanding member of the Wynton Marsalis small groups, the Lincoln Center Jazz Orchestra and many others. The Israel-born Avital has kept busy as a leader of various ensembles, as a collaborator with NYC peers like Jason Lindner and Avishai Cohen as well as a variety of Middle Eastern and North African artists, and alongside such greats as Roy Haynes and Jimmy Cobb.

Though the trio continued to play together frequently ever since their first meeting, the members never managed to schedule a recording until recently. On the snowy night of Dec. 29, 2009, the trio converged at the venerable Systems Two recording studio in Brooklyn, New York to record their first album. They chose simply to record songs, both old and new, that they loved. The goal was to capture their group sound and spirit, and to present it in as open and organic fashion as possible.

The trio thus recorded a wealth of material that they ultimately had to edit down to the length of a single CD. The tracks they collectively decided on were pieces that represented the “sweeter” side of the trio’s identity, songs that swing warmly without pretention, even when the intensity rises. There was a conscious effort to use material from outside of the normal jazz canon, including different folk forms of the world. The group was confident that their group rapport would transcend repertoire, reflecting their genuine mutual respect and delivering a ‘human’ feel.

The program begins with legendary pianist/composer Abdullah Ibrahim’s “Maraba Blue” that the trio handles with spare, but loving, tenderness as the gospel-inflected piece requires. Avital’s “Yes!” follows with an in the pocket, swinging excursion that opens up for grand solos. Drums set the stage on Jackson’s “Aziel Dance” before an uplifting piano melody sweeps through. Monk’s “Epistrophy” undertakes a 6/8 percussive makeover and multilayered excursions. Jackson’s “El Soul” slows things down for a reflective ballad, becoming a lovely feature for Avital’s lyric bass.

The trio continues with a tremendous interpretation of Mercer Ellington’s “Way Way Back” that shows that these guys really know and love the jazz tradition. Avital’s “Homeland” is a bittersweet, soulful, dramatic showcase of the trio’s emotional and dynamic range. Duke Ellington’s “The Shepherd” is a perfect vehicle for the trio’s spirited foray into the blues. They close the disc with Eli Degibri’s “Manic Depressive,” a classy but deceptive slow jam reminiscent of a late night in a smoky club.

Yes! is a special recording that captures a longstanding and inimitable friendship. It is both a celebration of the love of these three artists for each other and of the musical riches their partnership can foster.

Bandcamp Daily  your guide to the world of Bandcamp

Featuring Gary Bartz, 5 years of Rhythm Section Intl and an LP of the week by Nicolas Jaar